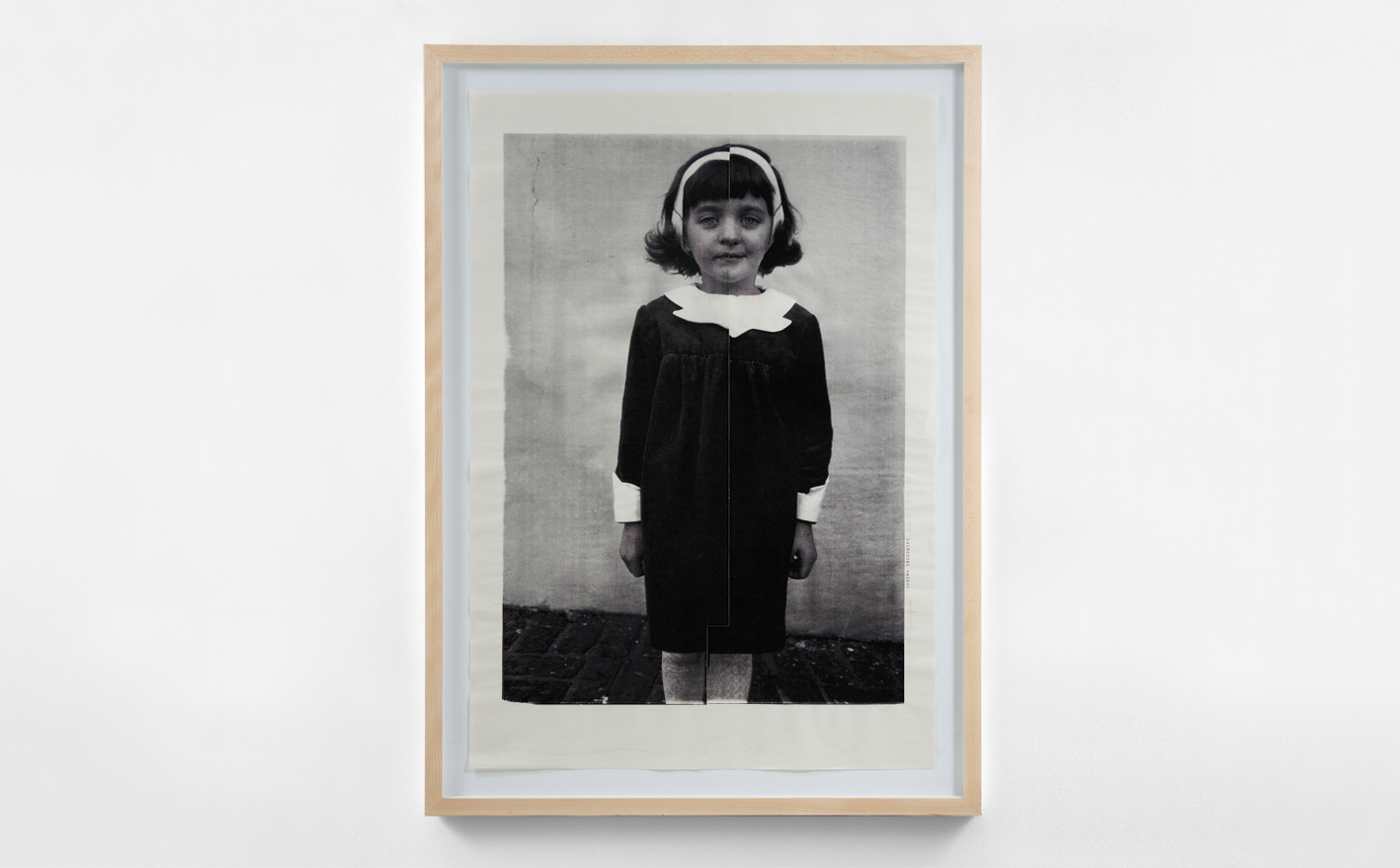 That work was created as a result of the analysis of the information and photographs from the Internet, associated with two girls – Cathleen Wade Mulcahy and Colleen Wade Yorke. One may notice an intriguing difference between the apparently identical girls. In medicine, identical twins are an unexplainable phenomenon. There is no unequivocal answer to what makes the embryo „decide” to divide into two. That case is hard to solve medically, but may have a rational natural justification. The conclusion from my work is based just on the comparison what the photograph’s author did herself, but by the comparison of the two girls.

I prepared the conversion in the simplest way possible, the cut „at the axis” allows the viewer to notice the borderline between the two fragments of the „Identical Twins” photo. However, the people who are less perceptive or the ones unfamiliar with the works of Diane Arbus, may not notice my interference. That work then becomes a simple, classical photo of a seven-year-old girl. With that operation, I concentrate on the phenomenon of identical twins – I formulate the following questions: How can we explain the birth of identical twins in Homo sapiens which is a mono-ovulation species? What makes the embryonic cell „decide” to divide itself, if in most cases it remains just one being? Is it only a physical division? Should we understand it as an example of splitting one body for the purposes of two souls? Did those souls had some kind of an argument in the spirit world about the possibility to be born in the given form?

I’m inclined to state that one soul, as a result of some internal inconsistency, decided to be divided by „budding” at the prenatal stage into two separate beings. It’s a need resulting from the natural spiritual development. And it doesn’t result from any spiritual defect. Such a situation should rather be understood as a result of spiritual development, associated with continuous maturation which, all in all, doesn’t end during lifetime, but continues in the cycle of reincarnation. That division takes place gradually, and may even start at the stage of the previous incarnation. But it isn’t manifested physically, but rather as a kind of spiritual splitting, an inconsistency felt by many of us. Therefore, that division is not a painful disruption, but a natural process.

However, in the case of failure at the attempt to split into twins, a series of complications may occur such as mental illnesses – schizophrenia, split personality or bipolar disorder. Those ailments might be associated with the stage of division of an inconsistent, evolving spirit. That state shouldn’t be perceived as a disease, but rather as a natural mental state. The patients shouldn’t be treated pharmacologically, but rather spiritually joined or split, so that both parts may follow different paths.

In the „Only Child” work I didn’t allow such a division. I worked with the photograph like a shaman who joins the split beings in a voodoo act. I resorted to the simplest artistic measures to join the two girls together. I want the girl created this way to start existing in my consciousness and, gradually, to creep into the consciousness of the viewers. The result is the establishment of a picture of a new person, a hybrid with the features of two beings. Two people conflating into one. I perceive the Wade sisters as two identical semitransparent vessels into which two substances with different colours have been poured. In that case the twin girls immortalized by Diane Arbus allow me to perform a comparative analysis of two beings with identical DNA code. Finally, what’s significant is not the shape of the vessel, but its contents. The division shouldn’t be understood as the outcome of a positive or negative influence of the spirit. The division may result from a completely neutral evolution. A lot of research suggests that twins constitute something of a unity.

There is a reason why twins are the most intimate siblings. Due to a relatively „fresh” division of the SELF, the twins adhere to each other as if to the other part of their own personality. The research conducted by professor Thomas Bouchard, published in „National Geographic”, describes many cases of twins raised separately as a result of adoption. The most incredible case is of the Jim brothers: „Jim Springer and Jim Lewis were adopted as infants by two different families which gave their children the same first name. When Jim Springer met with his brother in 1979 (at the age of 39), he discovered a series of similarities. Both were 180 cm tall and weighed 82 kg. When growing up, they both had a dog called Toy, and spent their holidays in St Pete Beach in Florida. As young men they both married women named Linda, and then got divorced. Their second wives were named Betty. They called their sons James Alan and Alan James. They both worked part-time as sheriffs, liked do-in-yourself work, had persistent migraines, smoked Salems and drank Miller Lite.”

In one of the studies, the employees of the Minnesota Study of Identical Twins Reared Apart (MISTRA) Institute stated „(…) that the probability of committing a crime by an identical twin with a brother or sister with criminal record, is 1.5 times higher than in the case of fraternal twins.” That example, although a little drastic, is a suggestive evidence of the untypical bond between two independent beings. The birth of identical twins is a kind of natural cloning process. However, there is a fundamental difference between twins and an artificial clone created by people. During cloning, the nucleus of a somatic cell may be placed in a cell from which the genetic material had been removed. By artificial stimulation, such a cell may be „reprogrammed” so that specific stem cells are obtained. Or even so that a fully functional organism is created. In accordance with my assumptions, such an organism is deprived of the internal SELF. It functions like a machine that only performs the basic functions encoded in the brain, necessary for survival. Such an organism is a useless entity – a vehicle without a driver. The higher its level of development, the more useless it is. It’s natural, just like in the case of simple organisms that reproduce by „budding”, because the individual SELF is practically nonexistent in those beings, but, just like in the case of plants, there exists the collective SELF. However, in the case of complex organisms, such as mammals and humans, the functioning of an organism without the SELF, i.e. of an artificial clone, is unnatural, and that clone dies much faster than its original counterpart. Therefore, the more developed the organism, the more necessary is the functioning of consciousness. An effective division in humans may only take place at the early, short stage of embryo’s development. A division after that stage may lead to a series of undesirable complications, such as an incomplete division resulting in Siamese twins.